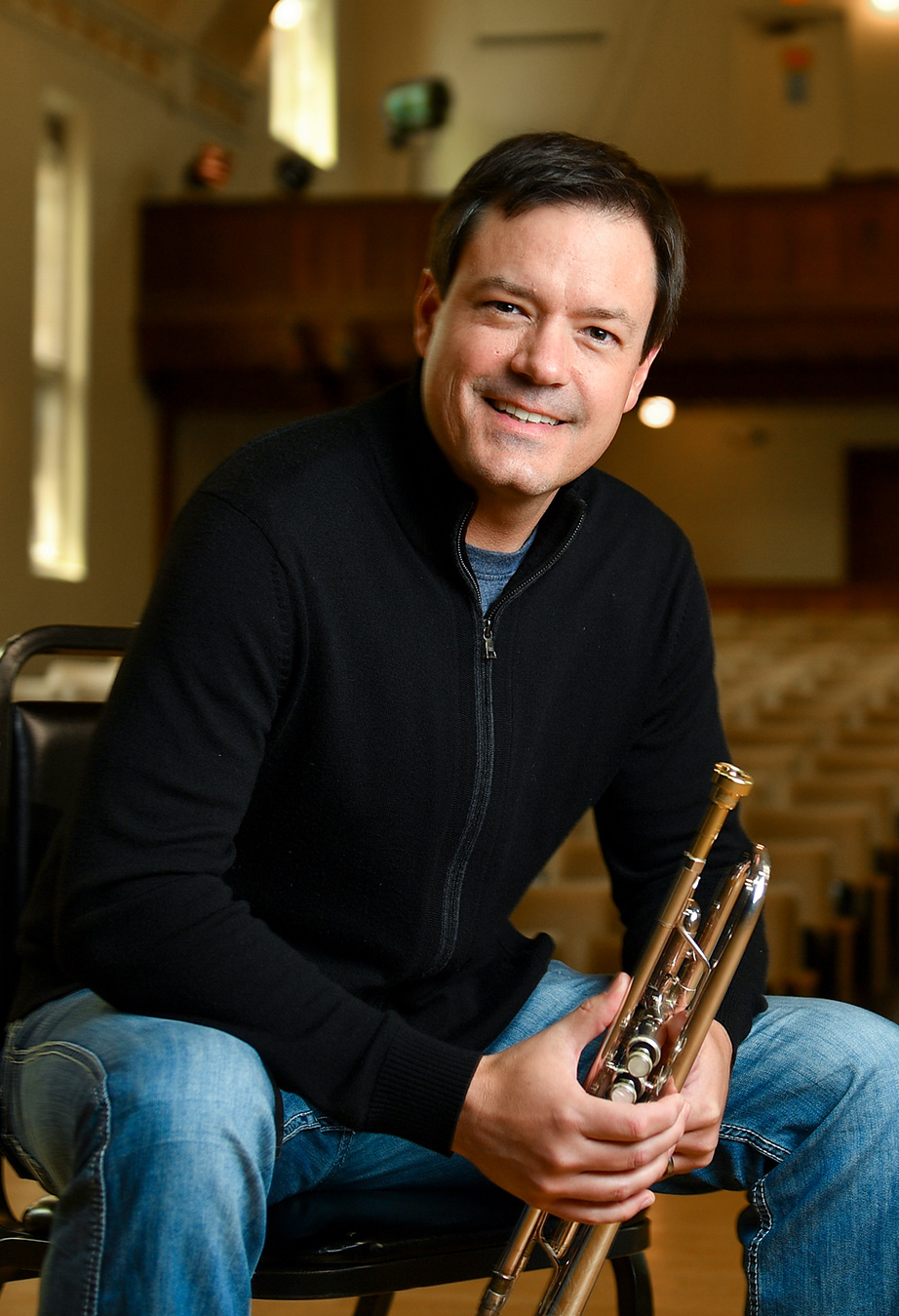 Adam Hayes is an internationally recognized performer, educator, and clinician. A versatile musician, Adam has performed throughout North America, South America, Europe, and Asia, including performances with over 40 professional orchestras throughout the world. With an interest in new music and creative music, Adam endeavors to promote the latest in solo trumpet repertoire. His debut album CURRENT, features innovative compositions for solo trumpet and piano and is distributed internationally on Curvepoint Media. Adam actively commissions new works for trumpet by a variety of composers. He has given the world-premiere performances of over 12 significant works for trumpet. Adam was a featured artist at the 2012 International Trumpet Guild Convention, premiereing Amy Dunker’s Etesian Traveler, an innovative composition for trumpet, piano, percussion, and dance. Adam has published articles and reviews for music publications, including the International Trumpet Guild Journal. Adam’s book, In Theory: The Trumpet, is a trusted resource in the collegiate trumpet studio. Adam has performed with professional ensembles including The Atlanta Symphony Orchestra, The Atlanta Opera, The Atlanta Ballet Orchestra, The Cincinnati Ballet Orchestra, The Cincinnati Chamber Orchestra, The Hollywood Festival Orchestra, The Hollywood Hills Orchestra, The New Mexico Symphony Orchestra, The Santa Fe Symphony Orchestra, The Chamber Orchestra of Albuquerque, The Dayton Philharmonic, The West Virginia Symphony, The Kentucky Symphony Orchestra, The Richmond Symphony, The Chattanooga Symphony, and numerous regional orchestras. Adam has been a soloist with the Ringling Bros. Barnum and Bailey Circus, and has performed on studio-recording and commercial engagements from cruise lines to Broadway shows. He has performed with notable artists such as Diana Krall, The Indigo Girls, Bela Fleck, Mannheim Steamroller, Edwin McCain, Joan Osborne, Neil Sedaka, New York Voices, Chris Potter and John Cowan. Several of Adam’s solo, chamber and orchestral recordings have been broadcast on radio and television. He can be heard on labels including ACA, 5ive Happiness, Curvepoint, Hal Leonard, and Mark Records. Adam Hayes is Artist-in-Residence and Assistant Professor of Music at Berry College in Rome, GA where he teaches the trumpet studio and courses in music. He serves on the Board of Directors for the Trumpet Festival of the Southeast, and is the Solo Reviews Editor for the International Trumpet Guild youth website. Currently, Adam serves as President of the Georgia Association of Jazz Educators. Prior to his appointment at Berry College, he taught at Clemson University, North Georgia College & State University, The University of New Mexico, Truett-McConnell College, and for the Georgia Governor’s Honors Program. He holds the Doctor of Musical Arts degree from The University of Cincinnati College-Conservatory of Music, a Master of Music from the University of New Mexico, and a Bachelor of Music from The University of Georgia. As an artist for Eastman Trumpets, Adam performs worldwide as a soloist and clinician.

Have a question or want to know more about the ETR534? Please provide your information below and we’ll be in touch shortly.